Looking for patterns, trends and discrepancies—most but not all organisms assemble proteins from the same amino acids.

Part of the universality of life is the observation that all living organisms construct proteins out of the same pool of 20 amino acids.  These 20 were identified in a rapid era of discovery after the development of partition chromatography in 1943.  However, this has now been expanded to include two additional amino acids – selenocysteine and pyrrolysine, giving a total of 22 amino acids.

Selenocysteine, as the name suggests, is similar to the amino acid cysteine but it has a Selenium atom as part of its side-chain (R-Group). It is a highly reactive and potentially dangerous substance – cells have to use some tricky metabolic pathways in order to prevent it from moving freely and building up in the cytoplasm.   It is used in certain redox reactions and has been found in all three domains of life, although it is not universal amongst them

Pyrrolysine is rarer, having only been found in some species of Archaeans and bacteria. It is structurally similar to lysine, but with the addition of a a pyrroline ring to the side-chain. It’s role and possible existence in other organisms is the focus of many ongoing studies.

Both of these amino acids are not encoded in the DNA – they are instead encoded by the stop codons UGA for selenocysteine and UAG for pyrrolysine and expressed via interactions with specific tRNA molecules, a process known as cotranslation. The biochemistry involved is fairly complex and difficult to summarise for IB biology purposes, but if you are interested the links below are a good place to start.

Selenocysteine and pyrrolysine are powerful examples of the versatility inherent in the genetic code. (Rother and Krzycki).

Like so many aspects of biology, once a rule is determined, the incredible variety of life shows us an exception.

For an interesting TOK-linked discussion, consider this quote, also from the Rother/Krzycki article:

They further provide examples of how precedent, though valuable, is not always the best predictor in scientific investigation…

What do the authors mean by this?  Does this mean that inductive reasoning is not always a reliable form of reason? What other examples from science can you think of to illustrate this quote?

Looking for patterns, trends and discrepancies—plants and algae are mostly autotrophic but some are not.

This is another NOS post that deals with the never-ending exceptions that arise whenever we seem to encounter a biological rule!

Back in Topic 5.3 (Classification) we learn that Kingdom Plantae is defined as containing organisms that are multicellular, photosynthetic and eukaryotic. Photosynthetic cells implies that the organism is autotrophic, but it turns out that this is not always the case!

The obvious exception would appear to be the carnivorous plants, such as the Venus Fly Trap (Dionaea muscipula) or the pitcher plant (such as Cephalotus sp.). 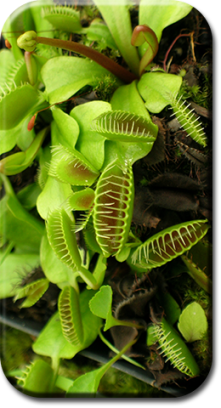 However, these plants retain their photosynthetic abilities and can even be raised successfully without providing any insects for them to eat (Rice). According to Rice (2007), this makes them only partially heterotrophic, as they still derive a large proportion of their energy from photosynthesis.

The true heterotrophic plants are those that are parasitic or saproptrophic.  A great example of a parasitic plant is Rafflesia arnoldii, the plant that produces the largest flower in the world.  It is a parasite of certain jungle vines and produces no roots, shoots or stem.  In fact, it is only visible when it flowers.  It gains all its nutrition through its parasitism of the host plant.

Similarly, there is a bewildering diversity amongst algae of organisms that are facultative and obligate heterotrophs. Many of these species have, like Rafflesia, become parasites, such as the genera Helicosporidium and Prototheca. Others, such as the fascinating genus Polytomella, have four flagella and are motile heterotrophs.

As always, biology refuses to be put into a box!

Looking for patterns, trends and discrepancies—there are common features in the bone structure of vertebrate limbs despite their varied use.

This Nature of Science statement fits neatly into the syllabus content for this topic.  One of the applications for 5.1 is – “Comparison of the pentadactyl limb of mammals, birds, amphibians and reptiles with different methods of locomotion.” (IBO, p67). Thus understanding the importance of the pentadactyl limb as an example of a homologous structure should allow you to understand it as an example of seeking patterns, trends and discrepancies.

All amphibians, birds, reptiles and mammals descended from a common ancestor that had a tetrapod (4-legged) body plan and lived some 360 million years ago. However, as the different vertebrate groups then radiated outwards, this basic structure became adapted for different functions, some more radically than others.  Snakes have lost their legs, birds developed their forelegs into wings and whales and icthyosaurs returned to the water, with fore limbs adapted for paddling. However, despite these differences in function, an analysis of anatomy shows the same underlying structure.

The pattern is the repeated form of bone and limb structure (1 long bone-2 shorter bones-smaller bones-5 digits); the trend is that this developed among all four tetrapod classes and the discrepancies are the evolution of different functions and forms (wings-flying; flippers-swimming; arms-grasping etc. )

As Stephen Jay Gould wrote, “Why should a rat run, a bat fly, a porpoise swim and I type this essay with structures built of the same bones unless we all inherited them from a common ancestor? (Gould, 258).

Looking for patterns, trends and discrepancies—patterns of chromosome number in some genera can be explained by speciation due to polyploidy.

Polyploidy is a condition of possessing more than two sets of chromosomes.  This duplication typically occurs during meiosis and may result in triploid (3n), tetraploid (4n) or even hexaploid (6n) offspring. This sounds potentially devastating (think of the effects of just having one extra chromosome!) but is thought to be a key driving factor in speciation in some organisms. Up to 1 in 100,000 flowering plants are polyploid, showing a high degree of tolerance.  In fact, over 75% of flowering plant species may be recent polyploids! Common polyploids include potatoes, bananas, cotton, wheat and watermelon.

Although it also can occur in amphibians and fish, mammals and birds are typically less tolerant, with an estimate of 10% of spontaneous miscarriages in humans being due to polyploid embryos (Woodhouse et. al.).

The advantages of polyploidy include:

Looking for patterns, trends and discrepancies—laboratory experiments and field investigations helped in the understanding of different types of behaviour and learning.

A classic 1950s lab study investigated mimicry in butterflies in the lab by providing caged birds with different species and recording their feeding behaviour (van Zandt Brower, 1958). This was based on the observed toxicity of monarch butterflies (Danaus plexippus) and its presumed mimic, the viceroy butterfly (Limenitis archippus). The butterflies were prevented from flying by folding the wings together and then presented to the birds. Control butterflies that did not mimic the coloration of the monarchs  were eaten in every trial by all birds. The monarch was not eaten in any of the trials and the butterfly that mimicked the coloration of the monarch (the Viceroy) was similarly avoided.  The study helped expand our understanding of mimicry and bird foraging behaviour in a very controlled setting.

In contrast, field studies have a range of challenges in ensuring that the behaviour observed is free of bias or manipulation by the presence of the observers. One recent interesting study investigates foraging behaviour of harbour seals in Alaska (Womble et al.). Dive duration and depth were inversely correlated with prey density, which depended on the habitat of the seals (glacial or terrestrial). As part of the investigation, seals had to be captured, sedated, weighed and fitted with data logging devices to record temperature, time and depth. They were then released and the data provided by the devices used to determine their foraging strategy. Obviously, there is some invasiveness in this method, but it does enable the researchers to then collect data on the natural feeding behaviour of the seals.  Field studies regularly involve such trade-offs. Similarly to lab experiments, they must also acknowledge the potential ethical concerns of these studies.

Looking for patterns, trends and discrepancies—there is mounting evidence that the environment can trigger heritable changes in epigenetic factors.

This is highly topical given some recent events in the science news. But firstly, for a primer on epigenetics, check out Sci Show for their episode on Epigenetics.

Epigenetics is essentially “…genetic control by factors other than an individual’s DNA sequence.” (Simmons). These factors are thus important in the switching on or off of particular genes. While this happens throughout life, particularly during embryonic development, it is the growing body of evidence of environmental influence during adulthood that is particularly exciting.

A recent study investigating the genomes of obese men and obese men before and after bariatric surgery detected epigenetic effects coded in men’s sperm (Donkin et al.).  The environmental factors of obesity, as well as recovery from obesity, seem to effect the genes coded in the sperm, thus influencing the genome of future offspring. These genes seem to be linked to appetite control, providing intriguing insights into how obesity may become genetic and not just environmental.

If the environment affects genes and these changes are passed on to offspring, rather than the genes you were born with and inherited from your parents, then there are some very interesting possibilities that emerge for evolution.   As one scientist commented, this is a “…provocative start to asking some really interesting questions,” (Simmons).  Consider some of these yourself – it makes you rethink topic 5!

1.1 Looking for trends and discrepancies—although most organisms conform to cell theory, there are exceptions.

A theory is the highest level of certainty in science, built up from a large collection of observations and experiments.  According to the online science dictionary, a theory is:

“A set of statements or principles devised to explain a group of facts or phenomena. Most theories that are accepted by scientists have been repeatedly tested by experiments and can be used to make predictions about natural phenomena. See Note at hypothesis.”

Cell theory states that all living organisms are made of cells, all cells come from pre-existing cells and that cells are the smallest units capable of carrying out life processes. This is based on a huge amount of observation and experimentation involving microscopes. It allows predictions to be made – if a new organism is discovered, say, in a deep ocean vent, we can reasonable expect that it will be made of cells and that these cells are the products of cell division from parental cells and they carry out the functions of life.

What makes biology interesting, of course, is that there are so many exceptions to the rules.  Muscle cells, fungal hyphae and giant algae are all examples of organisms that do not completely follow the above tenets. However, they do not invalidate the theory.  These cells do, to varying degrees, come from pre-existing cells and are part of a living organism; they carry out life processes, have genetic material and a plasma membrane.

The overwhelming evidence to date supports the Cell Theory.